Best Things To Do on Halloween in NYC with Kids: Halloween Events on October 31 | MommyPoppins

As always, if an event piques your interest, click through to our listing for all the details, including addresses and times. And keep in mind: Really cool things to do with kids often book quickly, so register or buy your tickets ASAP.

Flushing’s 166th Street between 45th and 46th Avenues in Queens

Find all the details and other options in our trick-or-treating post. Another option for safe trick-or-treating: Bookmark this map of NYC’s Trick-or-Treat Streets, a newly announced initiative that expands NYC’s Open Streets program to Halloween night and enlists the help of local neighborhood organizations to provide programming and treats to area kids. The Trick-or-Treat Streets are closed to traffic from 4pm-8pm on Halloween night. 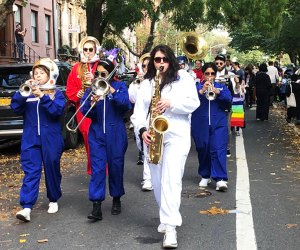 There is also a slew of Halloween parades on Monday, October 31—and we’re not even including the you-have-to-see-it-once Halloween parade in Greenwich Village, which celebrates its 49th anniversary! These are all kid-friendly neighborhood processions that deposit you into a stationary outdoor bash or in the vicinity of great door-to-door trick-or-treating. Our Halloween parades post features processions in Manhattan, Brooklyn, Queens, and the Bronx, but our top parade picks for Monday, October 31, include:

The Cobble Hill Halloween Parade, which leads into a fabulous trick-or-treat run on Clinton Street, full of brownstones, decorations, and friendly neighbors. FREE

The beloved Hippo Playground Halloween Parade is an Upper West Side rite of passage. Meet at the Soldiers and Sailors Monument for a band-led parade into the park and then party and play with all your new costumed friends. FREE

The Dumboween festivities in downtown Brooklyn include a costume parade, trick-or-treating at local businesses along the waterfront, and more family fun. FREE

The lovely enclave of City Island hosts its parade on Halloween, inviting costumed characters to gather in Hawkins Park for a promenade before trick-or-treating on the isle. FREE

Find all the details and other processions in our comprehensive Halloween parades post. 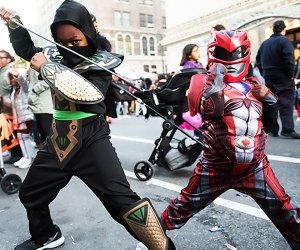 Get ready to party at BAMBoo! Photo courtesy of BAM

Head to Bryant Park for a bash at Le Carrousel including a magic show, face painting, a story time, and trick-or-treating through the holiday shops. FREE

Visit any local CAMP outpost for Campoween—there are locations in Flatiron, Hudson Yards, Columbus Circle, and City Point Brooklyn—in your best costume to trick-or-treat and enter the costume contest for a chance to win a $500 shopping spree. FREE

Hit the streets with the East Midtown Partnership for a fun trick-or-treat event with local businesses. FREE

Bring your dancing shoes to the Myrtle Avenue Plaza for a Monster Mash dance party. FREE

While these are our top picks, there are plenty of other Halloween celebrations set for Monday, October 31, in our scarily jam-packed Activity Calendar.

A version of this post was published in 2017; it is updated annually.

How to Make Playdough Animals with Kids

Free Printable Puzzle for Kids to Celebrate Day of the Dead

Is My Teenager Gaslighting? – Help Your Teen Now

Why Do We Let a Number Take On so Much Meaning?

When it’s not just morning sickness