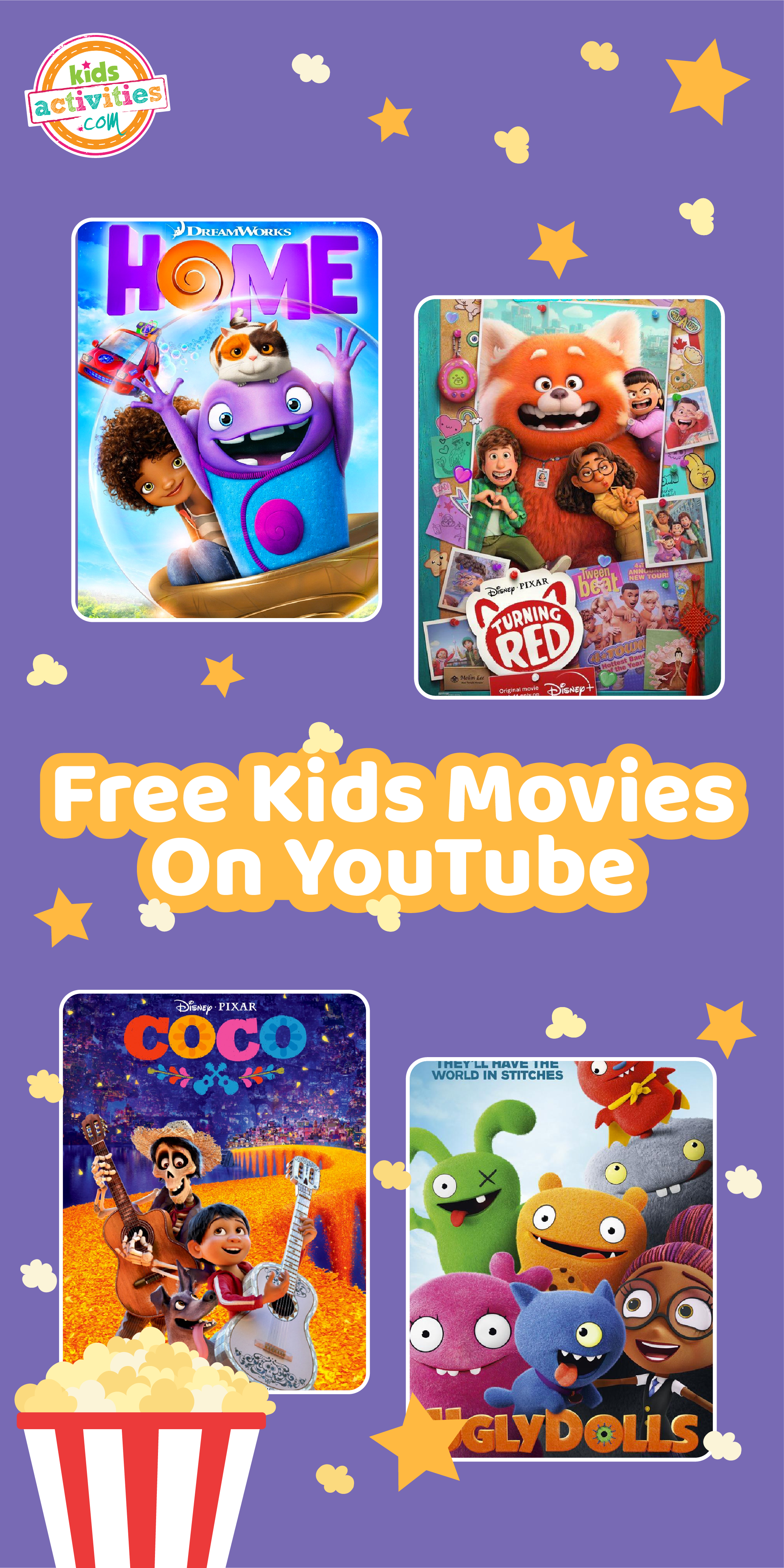 Are you looking for new movies to watch with the whole family? Do you struggle with finding great free kids movies? We are sharing 25 great free movies you can watch on YouTube!

You’ll find popular animated films, old cartoons, and Christmas movies. We have movies for older kids and a younger audience too. We hope you enjoy this large collection of kids movies!

But there is some inappropriate content out there, and we want only safe options for our kiddos. We recommend creating an entire playlist with these YouTube kids family-friendly movies to ensure they’re watching only content chosen by us.

That’s why we came up with a great list of movies they can watch on YouTube. Most available movies have educational content and important life lessons, but others are simply cute cartoon movies perfect for all babies.

One thing is true: all of these movies are great entertainment! Just click on the title of the movie to enjoy these free YouTube movies, and watch either on your browser or the video app.

Good Burger is actually one of my favorites on the list! This movie is about a high-schooler who is forced to get a summer job at a fast-food restaurant, called Good Burger, after causing a car wreck. Now, he has to work very hard at Good Burger to pay off his debt.

Snow Queen is all about a magical adventure in a frozen land. Kai, a young boy, is kidnapped by the Snow Queen who takes him to her palace. Gerda, his sister, goes in search of him along with her pet ferret and a troll.

We recommend Khumba for kids that are at least 8 years old as it sparks kids’ inner creativity. It’s about a zebra that is rejected by his herd for having only half his stripes. So he decides to set out on a mission across the Karoo Desert to find the legendary water hole where the first zebras got their distinctive markings.

ALASKA is one of the best full-length movies that talk about all about adventure and family. After moving to an Alaskan village with his two children, widower Jack Barnes takes a job as a bush pilot. The son doesn’t like his new home, but when his father turns up missing after an airplane accident, the boy and his sister travel into the Alaskan wilderness to find him.

5. Guardian of the Ancient Shadow Crown

Guardian of the Ancient Shadow Crown is the perfect movie for kids and teens who like fantasy. Nine-year-old Matthew finds a key to a magical world at the bottom of his grandmother’s garden where he encounters the mystical Shadow people. What will happen next?!

Rodgers & Hammerstein’s Cinderella is one of our favorite full-length feature films based on classic childhood stories, and it’s a great movie to teach kids the importance of working for what we want instead of just wishing for it.

Ice Age 2: The Meltdown is a continuation of the famous film Ice Age. Manny, Sid, and Diego discover that the ice dam protecting the valley they were residing in was about to fall and eventually lead to floods. Soon after, they scamper off to find a safer habitat.

Ugly Dolls is an animated comedy that explores the issues of body image and the idea that true beauty is inside a person, not outside, making it a perfect movie for every little girl and little boy out there.

A Turtle’s Tale: Sammy’s Adventures Family Movie shows the importance of taking care of our one and only planet. A sea turtle, which was hatched in 1959, spends the next fifty years traveling the world, while it is being changed by global warming.

10. Raya and the Last Dragon

Raya and the Last Dragon is a fantasy movie that will delight kids and adults alike. Raya, a warrior, sets out to track down Sisu, a dragon, who transferred all her powers into a magical gem that is now scattered all over the kingdom of Kumandra, dividing its people. What lessons will we learn from her story?

Pixies is about Joe Beck, who has lost the girl whom he loved because of a Pixie’s curse. As he ventures into the world of Pixies to reverse the curse, he discovers some fascinating stories and secrets.

The Horse Dancer is all about friendship. When Samantha is removed from the Olympic gymnastics team due to her attitude, she is sent to the Black River Horse Camp for the summer. While there, she learns the value of friendship as she discovers her love of vaulting on horseback.

Ribbit is a “toadly” awesome adventure! A frog who hates the water and jumping wishes that he could be like the other animals in the Amazon rainforest. What lessons will he learn along the way?

Dino Time is all about the adventures of young dinosaurs and three mischievous kids, Ernie, his sister Julia and his best friend Max as they are transported back 65 million years in time where they meet a T-Rex named Tyra and her rambunctious dinosaur son Dodge.

6 Children & 1 Grandfather is about a rich older man who is horrified when he receives an unexpected inheritance that disturbs his peace and changes his life forever. A movie perfect for older kids and teens!

Freedom Force is an adventure out of this world, quite literally. Four youths travel through time, underwater cities, and jungles to save the world when an experiment goes wrong.

Jumbo is a movie filled with emotions and adventure. Jumbo, a little elephant, tries to find his father, and the journey of finding his father made him a war elephant. What will happen next?

Coco is just one of those movies that will bring out all emotions from deep inside. The story follows a 12-year-old boy named Miguel who is accidentally transported to the Land of the Dead, where he seeks the help of his deceased musician great-great-grandfather to return him to his family among the living.

19. Tom Little and The Magic Mirror

Tom Little and The Magic Mirror follows the story of Tom Little, a tiny peasant, who sees his future in a magical mirror and embarks on a journey to fulfill his destiny. He comes across a kingdom that is under the spell of a witch and decides to free it.

Kindness Matters is a great movie for people of all ages. A little boy named Lincoln, who is bullied for the way he talks, creates a superhero in his head. A lonely man rescues a puppy who transforms his life.

Home is an exciting movie for the little ones. After a hive-minded alien race called the Boov conquer the Earth, they relocate the planet’s human population — all except for a little girl named Tip, who’s managed to hide from the aliens. Follow her adventures across the universe!

Frozen 2 tells the story of the beloved character Elsa, as she travels to the enchanted forests and dark seas beyond her kingdom — an adventure that soon turns into a journey of self-discovery.

The Magic Door is a fantastic movie about a magic Troll who aims to defeat the Black Witch and find the magic door that will lead him home with the help of the Elf Flip, and the children Sally and Liam.

Lenny The Wonderdog is a fun movie about a talking dog. After an experimental microchip gives a dog the ability to talk, he befriends a young boy and they set off on an adventure to save the world from an evil scientist.

Which movie are you going to watch first? Or which one was your favorite?

Too Old for Camp, Too Young for a Job: Summer Activities for Tweens

50 things to do in Toronto with kids this summer

How to Make Foaming Bubbles: Great fun for kids of all ages!

Too Old for Camp, Too Young for a Job: Summer Activities for Tweens

Dog-assisted interventions can lead to lower stress in children

Dear Daycare, Thank You For Loving and Caring for My Baby

40 Easy Toddler Art Projects with Little to No Set Up

How to Find an LGBTQ+ Friendly Care Provider for Pregnancy, Birth, and Postpartum

4 TRENDY AND MODERN HAIRSTYLES FOR WOMEN IN 2021